I’ve been kicking this one around a while … possibly went overboard on detail/text but in any case I called it done and finally shipped it out. So sad what’s being done to our once great country.


New one on our lovely mainstream media.

Just a fun one from a recent AF episode. As is often the case this wasn’t my idea, I simply illustrated it. 🙂

This guy J.D. Vance is being carted out as a forefront/thought-leading of the post-Trump era. While he says some things right now that seem “America First” there are plenty of danger signs that he could be a fraud – especially given his Anti-Trump past. Time will tell I suppose if he’s legit because he has tons of $ behind him …

Kind of traditional/cheesy I know but I had to do something. What an absolute train wreck/embarrassment. This man was not elected president and everyone knows it.

Reminder that very sick, evil people are destroying America by using and hiding behind an unelected, barely-standing dementia patient.

Very silly/simple cartoon … but wanted to do something to at least document the insanity that Andrew Torba of Gab.com has to put up with. Banned from 4 banks now … after being banned from PayPal, VISA, Stripe, Coinbase and other things … all for doing nothing wrong other than being called names and being the target of slander on the “mainstream media” etc. Insane. I don’t know the specifics of “Gab Bank” or how likely the plan is to succeed or not – but I for one hope he succeeds because there are many American patriots in addition to Andrew who have been banned from all these same financial institutions – so anyone trying to workaround/defeat this financial terrorism is fine by me.

Not that it needs to be repeated but … it is very sad to see this happening to more people in AMERICA. If only the Libertardians and (sane?) Democrats (if any left) cared enough to help the right fight against this. Meanwhile our useless politicians just invite social media CEOs to pointless hearings, talk about repealing 230 or something … and then nothing happens (all while taking donation money from the same companies). Joke country. But what do I know … I just draw pictures.

What happens now that everyone can see everything is fake and rigged? 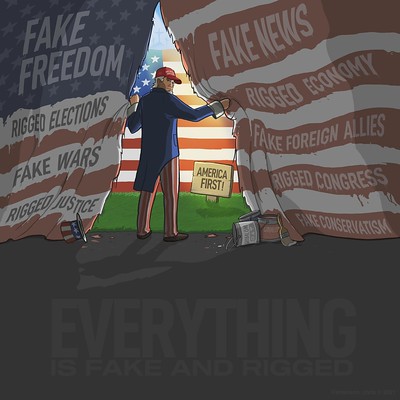 He was right all along pic.twitter.com/kNlgD8fwCm

Obvious one (following last week’s Wall Street rigging) but I had to do it …
(And in case not obvious, artwork credit here goes to Disney’s original epic illustrators, I just copied/reworked their characters for this topic)

Robinhood locks out traders from GameStop, AMC, Nokia and others

A bunch of these hedge fund guys got these platforms, like Robinhood, that let people trade at home, shut down. And they froze the stock so it couldn’t be traded by these guys at home. That’s a criminal conspiracy. pic.twitter.com/gVpoLcoWm9

I Won’t Rest Till The People Responsible For Today Are Behind Bars pic.twitter.com/tlbHD4TPQ0

Emergency Press Conference – Everybody On Wall Street Who Had A Hand In Today’s Crime Needs To Go To Prison pic.twitter.com/aKr8aPbB3Z

This is how the system is rigged.

The elites aren't even trying to hide it.

Robinhood, who's revenue is largely tied to Citadel, restricts trading in $GME, $AMC, and $NOK.

Users can only sell, not buy.https://t.co/ASnCVnosgQ

Robinhood should be shutdown immediately, and anyone associated with halting $GME and $AMC should be tried for market manipulation.

I don’t love doing quick graphics but this is a same-day one I rushed out after today’s very sad event of Biden being “inaugurated” president … behind razor wire fences and 25,000 military troops (more military personnel than we have in Iraq/Afghanistan *combined* btw). God help us. 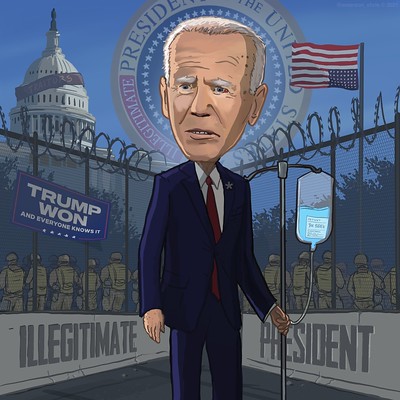 Check the stats here and the thumbs up/down ratio 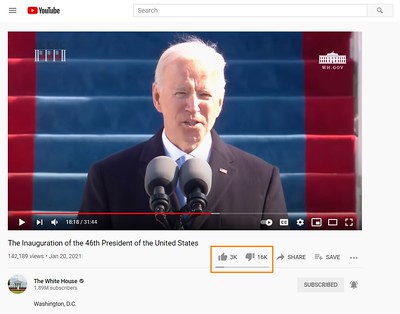 Thought this was kinda funny so thought I’d archive/share: 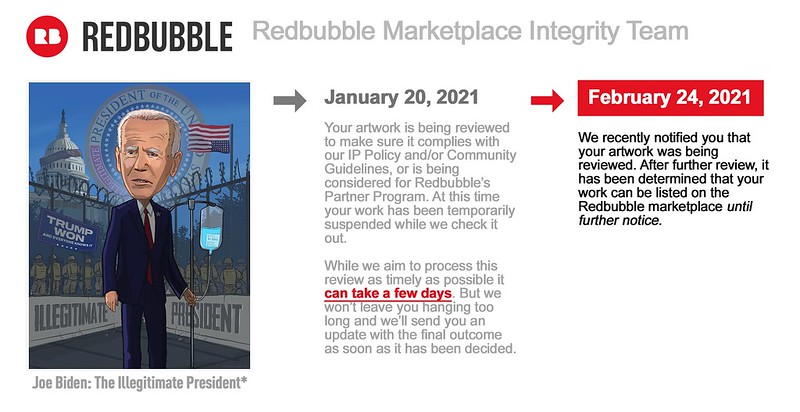 As the Navarro Report documented, each of the six swing states perpetrated disparate frauds, but all with the same goal of an illegitimate, statistically-improbable, and unconstitutional Biden “win.”

The #BidenHarris administration is #illegitimate and we will #Resist its totalitarianism with all our might. Biden is a liar and cares not one wit about unity, only submission to their corrupt and broken system. #Liberty https://t.co/2IgsXXEcQi

The View From Biden’s Motorcade. (What Do You Notice) pic.twitter.com/qHr7TK2Xya

There are at least twice that many illegal migrants in America (link to Yale study).

The illegitimate Biden is about to permanently change our country by destroying our sovereignty. https://t.co/U6ypGXJ4dR https://t.co/4hiwf5cqbh

God bless the guys at Gab.com. Here’s hoping the big tech oligarchs and censorship regime never take them down. 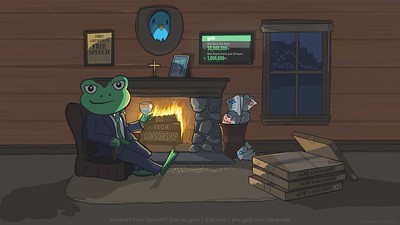 The Big Tech Exodus is Here Get On Gab

The Inspiring True Story of Gab.com 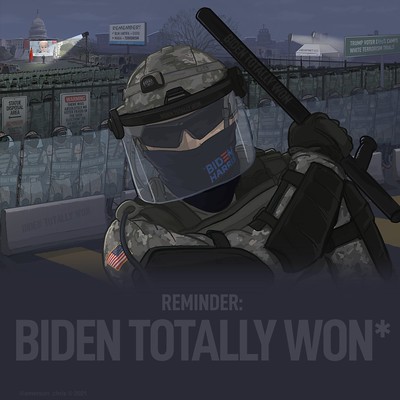 Biden is so popular and trump is so disliked that they have to have an army on hand in case the people rise up. Ok. https://t.co/mVcuTdHw9t

When 20,000 troops are needed to protect politicians from the public, the problem is the politicians pic.twitter.com/mkG0wi25F7

This isn’t about national security

Understand where it is all leading

"This is for a virtual inauguration of the most popular voted President elect in history".

Do they really think anyone believes that? pic.twitter.com/fCmRyJLcfF

Kind of quick one for what happened this past Friday (links below).

“We believe the risks of allowing the President to continue to use our service during this period are simply too great.”

President Trump will be banned from his #Facebook and #Instagram accounts until at least #January20, said #MarkZuckerberg. https://t.co/OnicF9UR01

THIS is what Trump was banned over…

This is criminal. Big Tech is snuffing them out because they won’t conform. https://t.co/sHKXBlWPGo

Very quick one for this week’s events. May God bless President Trump and God save America. 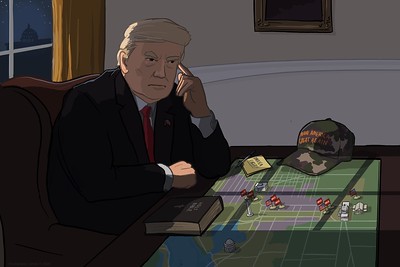 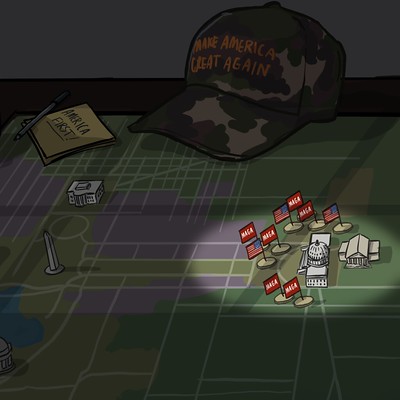 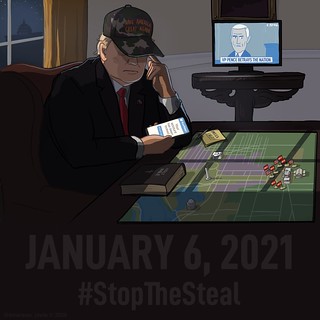 WHERE WILL YOU BE WHEN HISTORY IS MADE?#MillionMagaMarch #StopTheSteal #FightForTrump

FIGHT FOR TRUMP, OR PACK YOUR BAGS — WE WILL NOT STOP UNTIL EVERY TRAITOR IS VOTED OUT — THIS IS NOT A WARNING, THIS IS A PROMISE pic.twitter.com/PRwo2iR1bE

Just find/found it interesting how Charlie Kirk, a guy with direct access to the President and who has millions of funding from “GOP” and Con, Inc. organizations has only showed up to one of the Stop The Steal protests … while Nicholas J. Fuentes, someone banned on many platforms and entirely funded by superchats (and merch when his store isn’t banned) has paid for plane tickets and security to attend and speak at over 5 Stop The Steal events within a few weeks time. Shows you who is interested in defending the President and who’s in it for the money/etc. Meanwhile Kirk is focusing on the #SaveTheSenate nonsense while Trump is fighting traitors on all sides – shameful.

Insolent Charlie Kirk has a track record of shouting down questions that expose his moral cowardice.pic.twitter.com/kwE9dVYL9X

"We must send a message to every republican official… that YOU WORK FOR US!" –@NickJFuentes

A new movement has entranced the American youth, and it's called America First.

The Chad rally for the President, vs. the Virgin meet-up for the Senate pic.twitter.com/HP3OlS6cdM

Just a quick one on how far too many elected Republicans are not fighting for Trump in the obviously tainted (stolen) 2020 Election.

❗️AZ STOP THE STEAL❗️@NickJFuentes: The Republican Establishment has been disloyal to Trump from the beginning pic.twitter.com/Zl7GNtkSrq

Pay attention to who is fighting for President Trump right now and who is nowhere to be found. #StopTheSteal

Series of images from recent #StopTheSteal events – primarily around the work of Nicholas J. Fuentes and Alex Jones in Georgia and DC.

Standalone image of Nick and Alex. 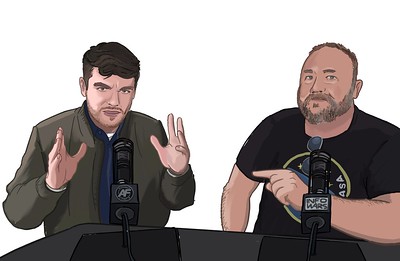 .@NickJFuentes calls out establishment Republicans for their complicity and rallies patriots in support of President Trump! pic.twitter.com/voUNRtDiMw

Atlanta Georgia crowd erupts in "WE WANT TRUMP" chants before @NickJFuentes says: "The #TruckerStrike that is coming up this month is only the beginning"#AuditGeorgia #StopTheSteal #TRUMP2020 pic.twitter.com/nJthHVK0mh