At least Rand Paul tried … but with a 50/50 Senate, two spineless female GOP senators (Murkowski/Collins) and President Kamala as tie-breaker it was pretty much a doomed situation from the nomination.

Some “reference” photos of this individual: 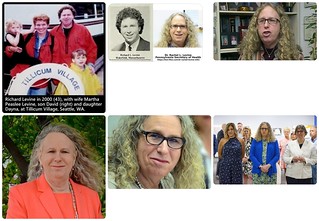 This guy J.D. Vance is being carted out as a forefront/thought-leading of the post-Trump era. While he says some things right now that seem “America First” there are plenty of danger signs that he could be a fraud – especially given his Anti-Trump past. Time will tell I suppose if he’s legit because he has tons of $ behind him …

Kind of traditional/cheesy I know but I had to do something. What an absolute train wreck/embarrassment. This man was not elected president and everyone knows it.

Reminder that very sick, evil people are destroying America by using and hiding behind an unelected, barely-standing dementia patient.

Since “President” Joe Biden can’t manage to give the traditional January State of the Union himself (let alone walk up stairs w/out falling down) here’s my humble attempt at a visual version of the American 2021 State of the Union. In short … things are really bad. To be fair of course a few of these topics were already creeping/going on during Trump’s presidency though far less and at a far slower pace and if he had gotten a 2nd term (i.e. if the election hadn’t been stolen) it’s very possible he would have resolved some of these issues to some degree. All we can do is pray, stand up for Christ and defend the nation America used to be … and hopefully can one day return to something of it’s former glory. 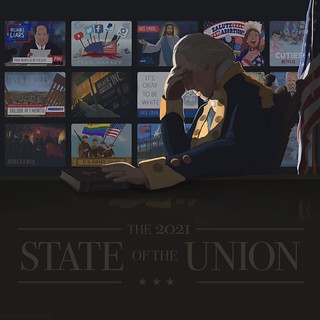 Funny Update April/21
I tweeted out a semi-joke question about Scott Adams “Golden Age” notion and his reply was the following. I wasn’t really expecting him to reply and certainly not going to debate him on things. He means well, is a smart guy and has been helpful to the country on some topics in the past and I of course would love things to be as rosy as he imagines/claims – but I of course don’t see things the same as he does (realizing his reply may just be his standard “persuasion/seeing the positive no matter what” technique). Anyhow I thought I’d document his reply in any case for fun: 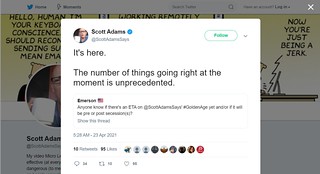 BTW the site I use to (sometimes) print my stuff (Redbubble.com) is starting to get a bit “lefty” – they’ve taken down some of my more politically charged images and I wouldn’t be surprised if they eventually ban/delete my account/artwork entirely – so this particular graphic will only be available at my alternate print archive here.

Quick but fun one from weekend on the recent controversy of Governor Greg Abbott of Texas condemning Gab.com for having too much free speech (basically). More information in this article: Addressing Texas Gov. Greg Abbott’s Statement About Gab

By the way if you want to support free speech and help Gab.com you can visit their shop here and buy something or just make a donation. This graphic is available as a T-shirt there by the way at this link. 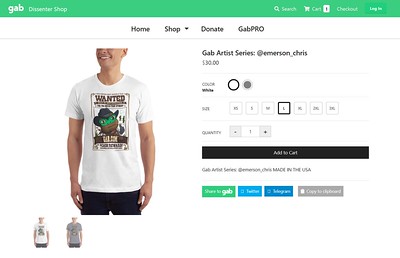 Pardon my doing another cliche (mostly) normie-tier graphic – but I had to do it. I know “Sleepy Joe” is a funny meme/name people use but it’s just insane/terrifying it’s probably pretty close to what’s actually going on in the White House now. I will hand it to the libtards, we may have been gutsy/brave enough to vote in a bull (Trump) to break up the china shop (govt/globalists), but they voted (cheated) in a barely-alive old man who very likely has some stage of dementia so now they can jam through all the insane anti-American policies they want while he plays w/his dogs or puts a log on the fire. The damage that’s been done to the country in just a few weeks with Biden (i.e. his handlers) at the helm is just mind-boggling … meanwhile the press is asking about Joe’s favorite ice cream or his dogs or cats … just pure evil. God help us.

There were a few tweaks/details I was going to add to this one but honestly it’s so depressing I may just leave it as is – it makes the point. 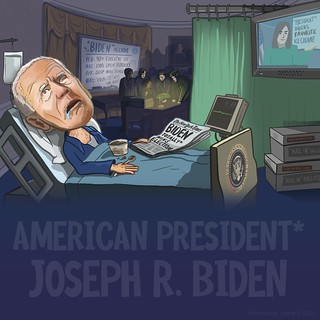 Very silly/simple cartoon … but wanted to do something to at least document the insanity that Andrew Torba of Gab.com has to put up with. Banned from 4 banks now … after being banned from PayPal, VISA, Stripe, Coinbase and other things … all for doing nothing wrong other than being called names and being the target of slander on the “mainstream media” etc. Insane. I don’t know the specifics of “Gab Bank” or how likely the plan is to succeed or not – but I for one hope he succeeds because there are many American patriots in addition to Andrew who have been banned from all these same financial institutions – so anyone trying to workaround/defeat this financial terrorism is fine by me.

Not that it needs to be repeated but … it is very sad to see this happening to more people in AMERICA. If only the Libertardians and (sane?) Democrats (if any left) cared enough to help the right fight against this. Meanwhile our useless politicians just invite social media CEOs to pointless hearings, talk about repealing 230 or something … and then nothing happens (all while taking donation money from the same companies). Joke country. But what do I know … I just draw pictures.