Just for fun for Halloween …

Sargon of Akkad included mention of this poster in a recent video on this general topic. Note he is a liberal-leaning Brit so his take is way off (IMHO) but still funny/surreal to hear his take and his labeling my poster “fascist”:

If not obvious, this illustration was a modern reproduction/variation on this cool old WWII poster: Turning Point USA was too scared of Nicholas J Fuentes attending a debate (for which he had a paid ticket) so they accosted him with police outside the event and prevented him from going in. Ask yourself why would they do this? See below for video summarizing.

Why would they do this? Photo from the incident: 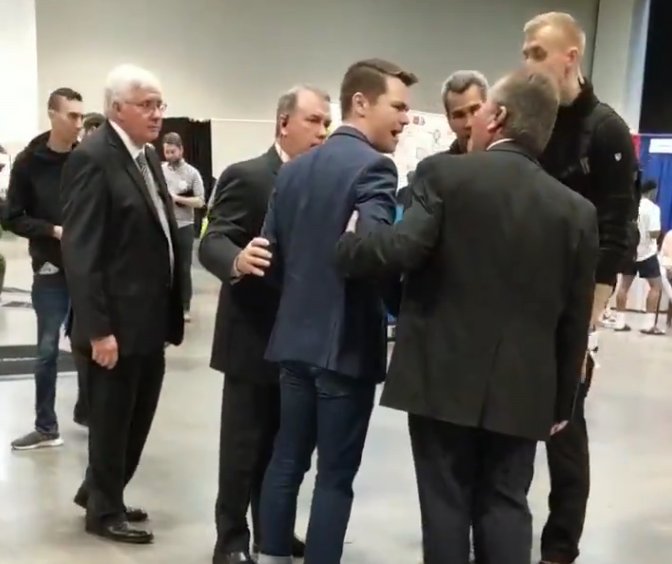 New one for AF. Reminder – as mentioned in the image’s small print – Nick does NOT smoke. The cigarette is just for effect from a recent show comment to a superchat (below). Like many other people I found “that scene” from the recent Joker (2019) movie so intense and awesome so I wanted to recreate it somehow. I ended up trying to lay it out like a comic book and tried to do it in a way that felt like the classic “Arkham Asylum” Batman graphic novel. I’m not sure how successful I was in the latter (I have zero experience creating comic books) but I am happy w/the final version in any case. I was torn on putting in any modern-day/non-movie elements but in the end I couldn’t resist fill the top center window frame with some of the evil icons of our “society” as well as an America First ad on the top right television set. Oh yeah and (belated) semi-spoiler warning if you haven’t seen the movie yet (but if you haven’t seen the movie yet – +1 week after opening – I don’t feel bad).

Why the hysteria about the Joker movie?

Few clips I pulled together that sum up the hype/hysteria (and reason for it):

Quick but fun pass at an America First vs Turning Point USA image. After last week’s photo drama (below) I wanted to pile on as much as I could.